In the same way that he broke the world record on the Rolling Thunder® and blew through the Timber Walk at this year's Arnold Strongman contest, Andrus Murumets dominated the No. 3 Captains of Crush® Gripper . . . at the end of the second day of Fortissimus! 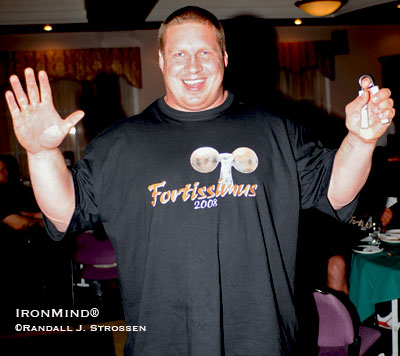 You've got to hand it to him: Andrus Murumets has one of the strongest grips in the world. IronMind® | Randall J. Strossen photo.

Anytime you can perform a world-class feat of strength, it's impressive, but when you can do it casually, with the sort of ease that indicates even more frightening levels of reserve strength, that's over the top - and doing things that way seems to be the special gift of Andrus Murumets.

When he broke the world record on the Rolling Thunder®, Andrus Murumets had never even see one before . . . he just walked up to it and lifted it in such a display of raw grip strength that people who witnessed it still gush about his performance. Fast forward to this year's Arnold, when IronMind® quipped that after Andrus Murumets scorched through the infamous Timber Walk, it should be renamed the Timber Run in Andrus's honor.

Coming off a win at the Strongman Champions League contest in Bulgaria, Andrus Murumets was in a podium position at Fortissimus until the he got sidelined, but no matter because when Randall Strossen showed up at dinner with a No. 3 Captains of Crush® Gripper for the Estonian strongman, history was about to be made again.

Andrus Murumets opened the gripper and with no warm-up or chalk, he whacked it down to about a one-millimeter gap, but that was only the beginning because with nary a rest, Andrus Murumets took another shot at it and put away the No. 3 Captains of Crush® Gripper.

Congratulations, Andrus - you are officially certified on the No. 3 Captains of Crush® Gripper.