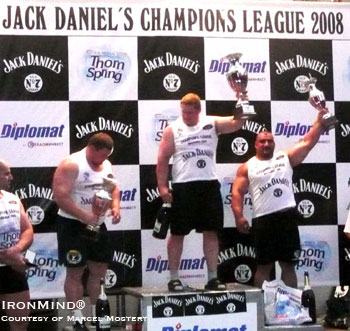 Andrus Murumets (center) was the king of the hill when the Strongman Champions League came to Sofia, Bulgaria. IronMind® | Photo courtesy of Marcel Mostert.

Here's how Marcel Mostert called the action for IronMind®.

"On a very sunny day in the open air in Sofia, Andrus Murumets beat the leader in the Strongman Champions League, Zydrunas Savickas. This was the fourth competition, now named with its head sponsor as the 'Jack Daniels Champions League Bulgaria,' and it was a success again.

"After six events, and with a new world record again (as so far in each Champions League competition), we crowned Andrus as the best man of the day.

"Despite the new world record from Zydrunas, seven reps with a massive log of 155 kg in 60 seconds, the big Z could not beat Andrus in the end. Even with the Atlas stones (130 - 180 kg), Andrus was a split second faster than Zydrunas.