He won World’s Strongest Man, Dancing With the Stars and was hit touring with Ladies Night . . . Is it any wonder that Magnus Samuelsson’s book is flying out the door? 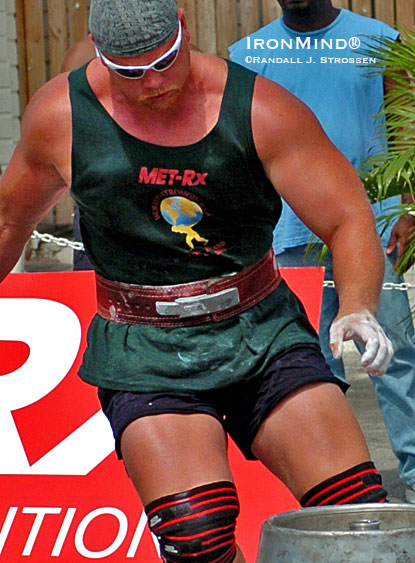 You can’t talk about Magnus Samuelsson and not think about huge arms and the kind of grip strength that got him certified on the No. 4 Captains of Crush® Gripper.  IronMind® | Randall J. Strossen photo.


Always working hard and always attuned to new business opportunities, the Swedish strongman has been enjoying a career that has continued to unfold since he won the 1998 World’s Strongest Man contest . . . TV commercials, seminars, and corporate adventure retreats were just a part of the mix.

And when he went from a guy who’d barely taken a step on the dance floor to the winner of Sweden’s Dancing With The Stars contest, Magnus Samuelsson catapulted to even greater fame and fortune, since the exposure he gained from that show was "like winning World's Strongest Man every week."

For starters, Magnus Samuelsson told IronMind®, “We did tons and tons of strength exhibitions,” but even that was only the beginning as more TV appearances followed and then he toured with Ladies Night, a live dinner and entertainment show for women only that appears across Scandinavia.

So, Samuelsson - whose ability to compete at the top of his game as a strongman was limited by a series of back injuries - says, “I went from relative darkness to the brightest of situations.”

If that sounds philosophical, you won’t be surprised to hear that Magnus Samuelsson’s book isn’t just about sets and reps - it’s also about realizing that you’re in charge and are responsible for how you do.  Sure, it’s about how to develop more muscle and increase your strength, but it’s also about values.

Although nothing is carved in stone yet, Magnus Samuelsson told IronMind® that he is exploring the possibility of releasing an English edition of this book, so if you’d be interested in this, let us know and we will pass along the word.