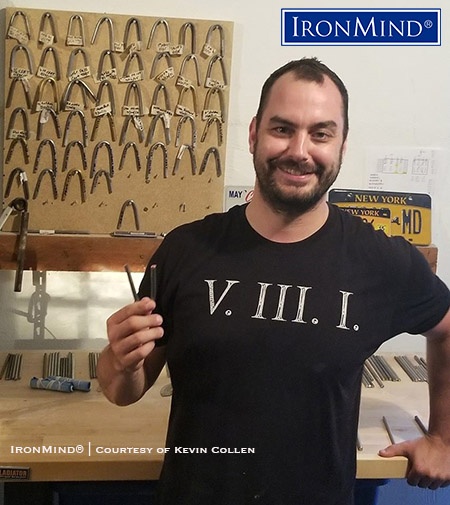 Kevin Collen shows that one good thing leads to another: he took up powerlifting for his back and then Captains of Crush grippers to help his deadlift, which led to grip strength contests, which led to bending and now he’s just been certified on the IronMind Red Nail.

"I live in Sherborn, Massachusetts ," Collen told IronMind, "and am a director at a university in the Greater Boston Area.  I run every morning with my dog Dixie to prevent her from destroying all of my belongings while I’m at work, and this has evolved to the point where I will be doing my first triathlon this summer.  The most experience I have with any kind of sport is competitive swimming, and I’ve done Brazilian jiu jitsu in the past and am planning on getting back into Armwrestling this summer.

"I work a desk job and don’t have any strength background to speak of.  I began powerlifting in 2010 to alleviate back pain (which was successful), and looked for tips on how to enhance grip strength for deadlifts.  This led me to the CoC [Captains of Crush] grippers, and eventually to grip strength competitions,which I competed in from 2011 to 2013.  I took some time off from any kind of training completely from late 2013 to early 2015, but picked up again to start bending in the summer of 2015.  I’ve been hooked since."

Congratulations, Kevin—it's official and your name has been added to the Red Nail Roster—and many thanks to Nathaniel Brous, RedNail '13, CoC3 '14 for officiating Kevin Collen's official attempt to bend an IronMind Red Nail.