Wasting no time making himself the first man to certify on the IronMind Red Nail in 2013, Nathaniel Brous banged through not just one, but two of them within the one-minute time limit. 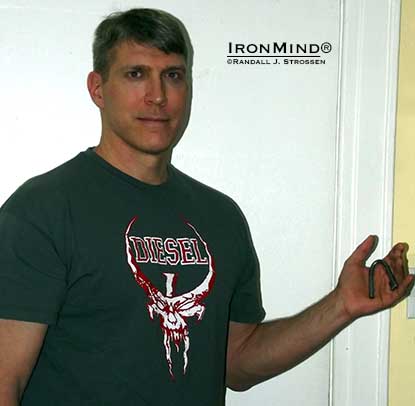 Nathaniel Brous started bending after he turned 40, but on his first try, the 6’ 4” 240 lb. Brous bent an IronMind Blue Nail.  Today, it’s official: Nathaniel Brous has been certified on the IronMind Red Nail, a benchmark short steel bend.  He is eyeing certification on the Captains of Crush No. 3 gripper next.  IronMind® | Photo courtesy of Nathaniel Brous.


“A couple of years ago, my daughter and I were watching American Ninja Warrior (ANW) and she loyally said, ‘You can do that Daddy!,‘  Brous told IronMind.  “A former competitive swimmer, sidelined by a heart condition, I had much less faith in myself than she did.  I did however, get off the couch and start training after a fairly stagnant 14 years or so.  In researching ANW, I learned the value of grip strength.  This led to my discovery of IronMind, its Captain's of Crush (CoC) Grippers and the entire niche sport of grip (strength),” said Brous.

“While I eventually realized that ANW's obstacle sport was a bit too taxing for me, I had already fallen in love with ‘Grip.’  Starting with the CoC#1, I have pursued it vigorously since April of 2011.  A finger injury has slowed my CoC #3 certification timetable a bit, but an introduction and later success with bending has kept me quite occupied,” Brous said, who credits John ‘Wojo’ Wojciechowski, Cesar ‘Chez’ Ricchezza, and Jedd ‘Napalm’ Johnson for their roles in his success, along with his wife, Maureen, and daughter, Abigail.

Congratulations, Nathaniel—your name has been added to the Red Nail Roster, the official certification list for the IronMind Red Nail Roster—and many thanks to Michael Sharkey for serving as the referee.