Finnish grip enthusiast Timo Tukkannen asked IronMind® about the possibility of having successful attempts on made on the Captains of Crush® Grippers (No. 3, No. 3.5 or No. 4) at the Finnish Open Grip Strength Championships count as the official attempts that are one element of the requirements for certification. 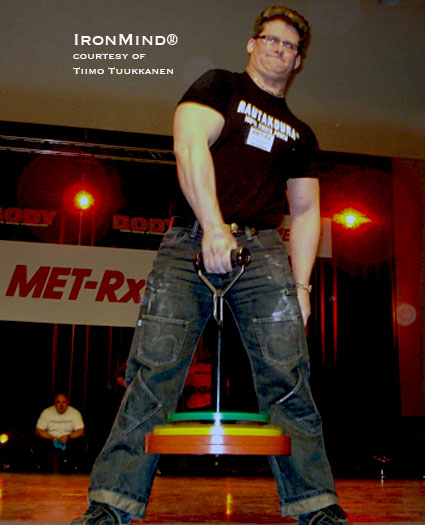 Timo Tukkannen (shown competing at the 2009 European Rolling Thunder® Championships), while fairly new to grip strength, is already making his presence felt: The 188-cm (6’ 2”) and 120-kg (265 lb) Tukkannen told IronMind® that he has “been training about 12 years at the gym more or less regularly, mostly bodybuilding style.  I’m a newbie on grip training since I tried some CoC grippers [Captains of Crush® Grippers] first time ever at exhibition autumn 2008 and noticed then that I have quite a nice grip by nature or as a result of my physical work with conveyor belts installation at our family-owned company.”  IronMind® | Photo courtesy of Timo Tukkannen.

The logic of this request, as Timo Tukkannen fully grasped, was straightforward: this grip contest is following the official rules for closing a Captains of Crush Grippers, so why dilute the best efforts by requiring certification attempts to be made outside (i.e., before or after) the contest.

The soundness of this suggestion was apparent to both IronMind® and contest organizer Sakari Selkäinaho, who explained,  “The event is run by official rules.  Every certification attempt is judged by Kimmo Kokko and overviewed by myself.”

So with everyone on the same page, it is official that these attempts will count toward certification (please note that the other elements are still required before IronMind® can make its certification decision).

Train hard and if you have a formidable grip, consider showcasing it at the 1st Finnish Open Grip Strength Championships - this grip contest is gathering steam and watch here for news on further developments.