“Zydrunas [Savickas] showed his power again, winning the MHP SCL Brazil,” Ilkka Kinnunen reported to IronMind, as the World’s Strongest Man winner continued to impress and reinforces his position as one of the favorites to win the MHP Strongman Champions League World Championships later this month. 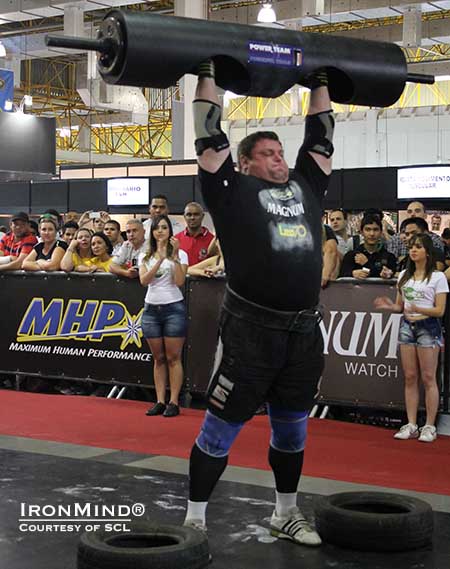 Zydrunas Savickas on the Log Lift for reps at the MHP Strongman Champions League competition held at the Expo Nutrition in Sao Paulo, Brazil.  IronMind® | Image courtesy of SCL


“In Sao Paolo, which is the biggest city in Brazil with over 16 milljon people, the EXPO NUTRITION was the location for the SCL semi finals on Friday.  The EXPO was in Sao Paolo for the second time, and it pulled total of over 25.000 people to watch strongman, fitness, MMA and bodybuilding. The EXPO was a huge success and was sold out every day said organizer Ana Graziano.

“The strongman competition was a cooperative effort between Nuno Araujo and SCL. Nuno had successfully worked with the SCL Portugal event earlier of this year.

“In the competition we had total of six events:

“Zydrunas won four of the events and in Circus Dumbbell he tied with Krzysztof [Radzikowski].

“On the 20th of November, SCL will travel to Malaysia for the finals.  At the moment Krzysztof is still leading, but Zydrunas and Thor are getting closer, so stay tuned for more action to come in  the SCL 2013 series,” said Kinnunen.