Marking his return to strongman competition, Misha Koklyaev pushed Zydrunas Savickas all the way in SCL–Finland this weekend, at the big Power Truck festival, but in the end, the Big Z pocketed the victory, two points ahead of Koklyaev. 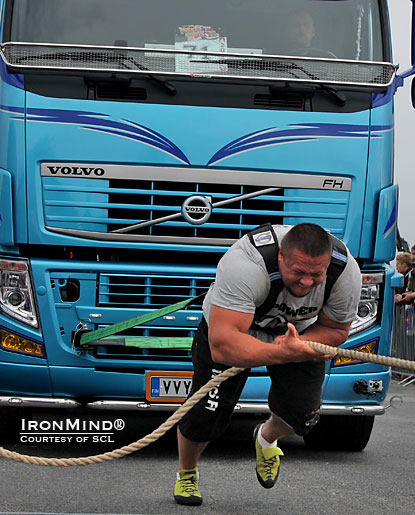 Misha Koklyaev won the truck pull at SCL–Finland and pressured Zydrunas Savickas to the very end of the contest—coming in second to the Big Z marked a big return to strongman for Koklyaev.  IronMind® | Courtesy of SCL.


SCL–Finland: Zydrunas Savickas and Misha Koklyaev Battle to the Finish
by Ilkka Kinnunen

Over the weekend, SCL–Finland took place in a small town called AlaHärmä.  The town was filled with people over 30,000 which is the new record for the Power Truck festival: beautiful women, strongman and powerful cars that is great combination to collect such a audience.

The competition started on Saturday in front of a full audience.  The weather was perfect for the athletes: +18 C and partly sunny.  There was a total of six competition events.

The first event was the Wheelbarrow, with total weight of 420 kg and a distance of 20 m. Terry Hollands showed his power and won the event with time of 8.69 s.   Second was Zydrunas Savickas at 8.81 and third was Misha Koklayev 9.16 s.

The second event the hard and heavy Viking Press. Total weight for hands 165 kg and time limit was 60 s.  Ervin Katona who holds the world record with same weight (13 reps) showed that his shoulder power is in good shape, doing 11 reps.  Misha Koklayev was second (10 reps) and third was Zydrunas Savickas (8 reps).

Third event before the break was Tyre Flip: 420 kg and in light rain made the event really difficult. Only two athletes could finish the full 5 flips: Misha Koklyaev won with a time of 44.43 s and Zydrunas Savickas was second with a time of 61.12 s.   Equal third were Ervin Katona and Lars Rorbakken with four flips.

After the lunch break, the competition continued with Truck Pull. The truck weighed 10,000 kg and the track was slightly uphill. The pulling distance was 20 m. Misha Koklayev had the best time, 25.67 s, followed by Zydrunas Savickas (26.08 s) and Terry Hollands (28.25 s).

The fifth event was the Forward Hold with 12.5 kg cylinders in each hand and the back leaning against a pole.  Finland´s Antti Mourujärvi showed some Finnish power in front of the cheering audience and won the event with time of 54.75 s.  Second was Zydrunas Savickas (51.44 s) and third was Ervin Katona (49.09 s).

The last event was the Yoke Race: 420 kg, 20 m.  Zydrunas Savickas had only a one-point lead against Misha Koklayev, but Big Z had zero wins in events and Misha had two wins.  They both knew knew this of course and really loaded all power to make best effort out of their performance.  However the event went to Terry Hollands, who came down the course fast with a time of 11.97 s.  Second was Zydrunas Savickas (13.84 s) and third was Misha Koklayev (14.08 s).

The winner 2012 SCL–Finland was Zydrunas Savickas.  In a great comeback to strongman sport, Misha Koklyaev got second place and third place went to Terry Hollands.   It was a great competition with excellent athletes, tight battles, a big audience and nice weather.  These are just few points why we will be back in Power Park 2013! 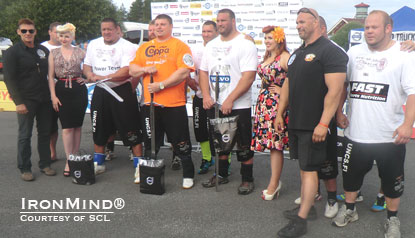 Second from the right, SCL-cofounder Ilkka Kinnunen looks like he's ready to trade in his stopwatch for a position among the competitors.  IronMind | Photo courtesy of SCL.