“The Strongman Champions League and its athletes are really booming at the moment,” said Marcel Mostert.  “So much exposure and great results, [so it] promises to be a good year!” 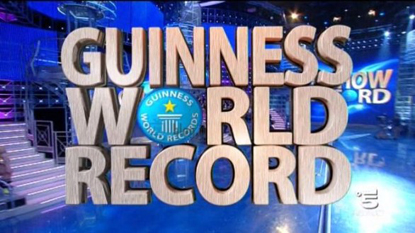 
“Together  with 10 other athletes we did already some great Guinness world record TV shows, and it seems Zydrunas is still in the winning mood.

“Yesterday we did a farmer’s walk of 150 Kg over 20 meters.  Zydrunas was the fastest in 7.55 seconds - a great speed with 300 kg total in your hands!  Laurence Shahlaei finished second, very close, in 8.10 seconds, just ahead of Kontantin Ilin from the Ukraine in 10.80 seconds.

“It is really a great show to do for all athletes with very professional people around us.

“And if you think Zydrunas has easy days, you re wrong.  He flies today straight from Italy to Dusseldorf, where he competes at the Strongman Champions League Germany at the FIBO.  Then he has to hurry to Vilnius again, for the elections in the government on Monday and Tuesday, where he might be chosen.

“On Wednesday, again back in Milan, to do a plane pull for the Guinness records.

“Also in that show will be for example Etienne Smit, the strong South African who is great in plane pulling!

“It will be an exciting week again!”