Zydrunas Savickas has always spoken softly and carried a big stick: just when some were writing him off, he bagged his seventh strongman title at the Arnold in what appears to have been his warmup for the World’s Strongest Man contest later this month. 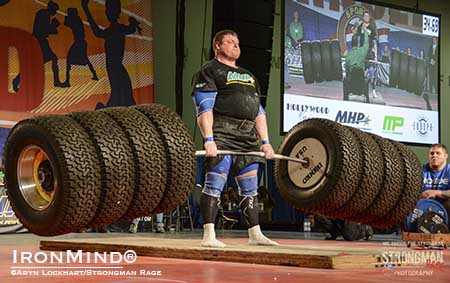 Zydrunas Savickas wins his 7th Arnold’s Classic breaking deadlift and yoke  records along the way. In the heaviest competition in the world, Savickas dominated—winning three of the five events. He overhead pressed the Austrian Oak log weighing 440lbs (220kg) four times; completed the record heavy yoke of  1,410lbs (650kg)  in 3.87seconds; broke a world record of 1,155lbs (525 kg) deadlift.  He tied with Burke, Shaw and Björnsson to complete four reps with the 274lb (124kg) Cyr dumbbell. Brian Shaw placed second overall and Mike Burke took third. This was likely an impressive preview for the World’s Strongest Man coming up at the end of March.

The competition was dedicated to the late Mike Jenkins who was the first winner of the Amateur Strongman Competition in 2010 and then went on to win the Arnold’s in 2012. He became an international sensation placing fourth in World Strongest Man 2013. 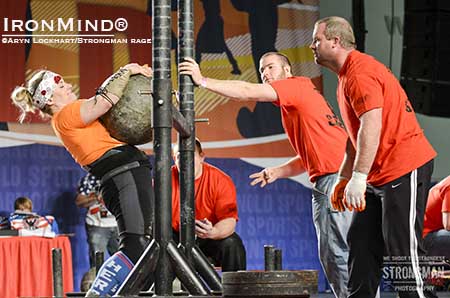 Alanna Casey: 75 seconds over the bar for reps with a 180-lb. stone.  Photo courtesy of Aryn Lockhart–Strongman Rage