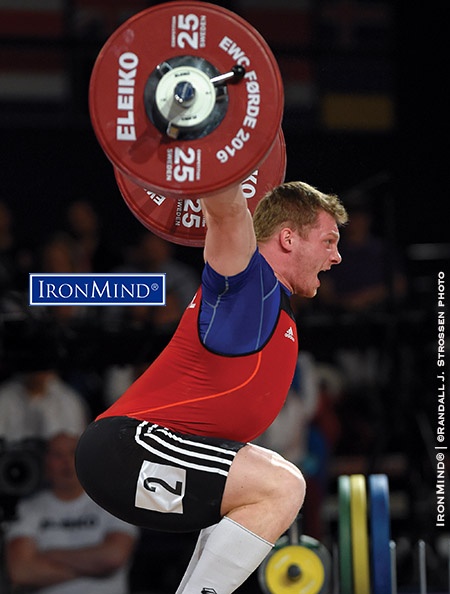 Lifting with impressive precision, 94-kg competitor Tomasz Zielinski (Poland) could have been putting on a weightlifting seminar at the 2016 European Weightlifting Championships. This 176-kg third attempt gave him the gold medal in the snatch. IronMind® | Randall J. Strossen photo

Forde, Norway—The 94-kg category at the 2016 European Weightlifting Championships: guys who couldn’t snatch, but could clean and jerk, as well as guys who do both; there were guys who looked like WWE understudies and guys who were cool, calm and collected—at the end of the night, it was the guy who showed mastery of both lifts as well as his emotions, Tomasz Zielinski (Poland), who took top honors.

Tomasz Zielinski made 170 kg, 174 kg and 176 kg in the snatch—a study in efficiency, he snatches transition seamlessly and there is no wasted energy, physical or psychological, in striking contrast to Zygimantas Stanulis who maintained the Lithuanian weightlifting tradition of coming out with arms almost like a bodybuilder and post-lift theatrics that would suggest a possible career in professional wrestling. Zielinski’s teammate, Luckasz Greka, having made 174 on his opener, missed 178 twice, as he tried to turn bronze into gold in the snatch.

Fast forwarding in the clean and jerk, an interesting matchup developed as the final attempts were clicked off:  the 12th place finisher in the snatch, Egor Klimonov (Russia), was locking horns with the gold medalist in the snatch, Zielinski. Klimonov smoked 204 kg and 211 kg before missing the jerk on 216 kg.

Heavier than Klimonov, Zielinski had also made 211 kg on his second attempt, so looking to move from silver to gold in the clean and jerk, Zielinski cleaned 217 kg on his third attempt, once again as if the bar were on rails, punched it overhead for what looked like another good lift only to lose the bar at the last minute—proving that the man is human after all.

Watch for the complete report in MILO.