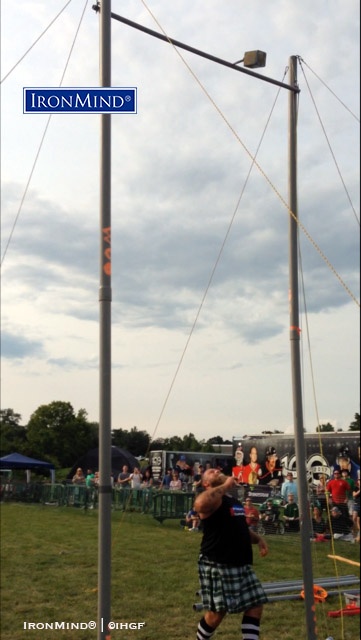 Zach Riley, a rapidly rising star of the Highland games in only his second year of competition, pulled out a very impressive all-round performance, with a clean sweep of all the events in what was the last qualifying stage of the IHGF All American series at the 2017 Dublin Irish Festival. Riley will advance to the finals of the IHGF All-American Championships at the Great Plains Renaissance & Scottish Festival in September.

The Dublin Irish Festival is the biggest Irish gathering in the U.S. and attracts about 110,000 spectators over its three days of Celtic festivities. The Highland games has been a prominent feature of the festival—and what a day it was for Riley. My first impression of Zach was that of a powerlifter, with his huge, powerful stature, but in talking with him I found out he has only been throwing for two years in the Highland games and has never powerlifted in his life, but was a former college hammer thrower with a best of 240; he is a kinesiology professor at IUPUI by occupation.

Over the course of the games Riley won every event, breaking the field record in the 22-lb. Braemar stone and setting a new world record of 18’ 1” in the Amateur A group division weight over bar, previously held at 18’ by Andy Vincent.

The 56-lb. weight over bar was a highlight of the competition as both G. Blatnik and Riley went all out, both clearing 17’ and Riley setting a new world record at 18’ 1”. He took three attempts at 18’ 6”, with one of the throws sitting on the bar. Stoltz, Mays, J. Blatnik, and Crawford tied at 13”.

In the 16-lb. sheaf over the bar, another world record attempt was made by Riley, who won the event at 37’ and then asked for the bar to be raised to 40’ 6” and came close but not enough on his three attempts. Second place was G. Blatnik at 30’, with a tie on third by Stoltz and Crawford at 27’.