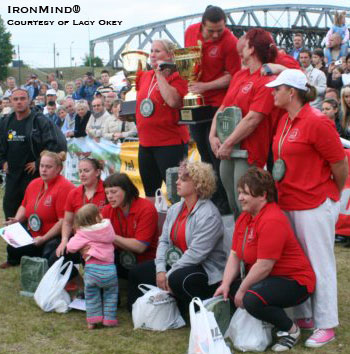 2008 World's Strongest Woman: "And a good time was had by all." IronMind® | Photo courtesy of Lacy Okey.

"We signed hundreds of autographs . . . on pictures and people's shirts, and an occasional child got signed [too]," said Okey, giving a sense of how having fun mixed well with the serious business of testing one's strength. In addition to citing the great competition, Lacy was quick to praise the extras like limo service that were part of the VIP treatment given the competitors.

"I really wish we could get it to be like this in America," Lucy lamented, but even so, from the sound of things, the after party left no doubt now about how to say "vodka" in Polish.

Here are the final places: