It’s the party everyone the strongman world wants to attend as once a year the World’s Strongest Man crew sets up shop, usually in an exotic location, with a series of challenges well suited to the tall, big and strong - a two-meter, 150-kg competitor who can manhandle huge stones and pull giant trucks at will is just one of the guys in this crowd of XXXLT-and-beyond bodies. 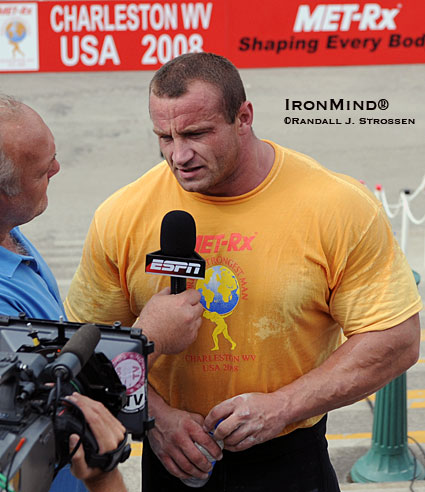 
Mariusz Pudzianowski has qualified, by virtue of being the defending WSM champion, and IronMind® has been told the following men have already qualified for the 2009 World’s Strongest Man, based on Giants Live, the official World’s Strongest man qualifying tour:

If you are a leading strongman competitor, or want to be recognized as one, the most important thing at this point is to get an invitation to the 2009 World’s Strongest Man contest, and as part of the selection process, IronMind® has been told by a reliable inside source that an IMG committee is developing the list of wild card invitations at this moment.

Stay tuned for more updates, both here and on IronMind®'s Twitter page.