Under the leadership of 2006 World's Strongest Man Phil Pfister, a renewed call for drug testing in strongman has been issued, and while Pfister's drug-tested America's Strongest Man contest had to be postponed this year, to make way for "an even bigger, yet to be named competition," Pfister continues to push for the advancement of strongman, and the introduction of drug testing remains a fundamental goal. 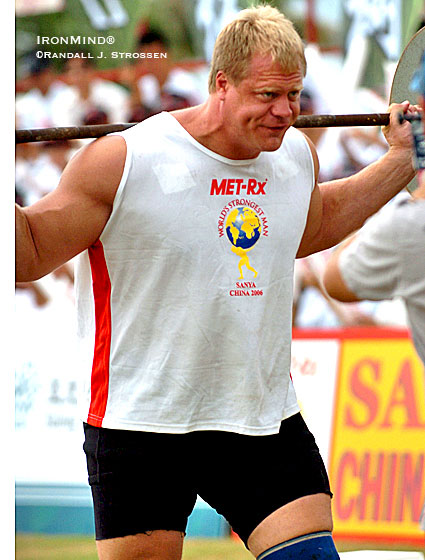 Taking a walk on the wild side, Phil Pfister warms up for the Car Walk at the 2006 World's Strongest Man. Destiny was calling and Pfister was reaching for the phone - a few hours later, he would be the first American since the mighty Bill Kazmaier to win the biggest competition in strongman, the World's Strongest Man contest. IronMind® | Randall J. Strossen photo.

Pfister said that he would "like to see America's Strongest Man evolve to the point where it has WADA-level drug testing, good prize money for the competitors, and ESPN TV coverage, and that it leads up to invitations to the premier strongman contest, World's Strongest Man."

"Additionally," Pfister told IronMind®, "we are encouraged that WSM Super Series as well as the Arnold Strongman Championships are also looking toward drug testing." Representatives of both these groups "have expressed a common interest in moving in this direction and they view drug testing as critical to progress in the sport," Pfister said.

"Also, in the interest of fairness and establishing a level playing field, health, safety and athlete longevity, drug testing is the way to go," Pfister said. "Strongman does not need the stigma of tragedy and cheating associated with drug use."