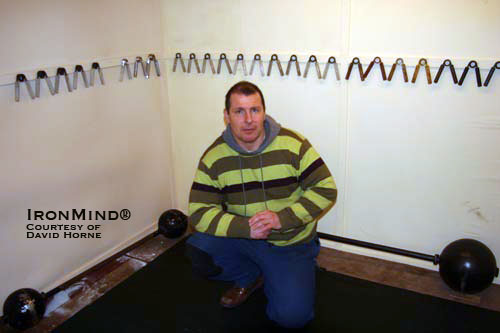 Some guys collect equipment, and some use it - David Horne does both very well and his gripper collection is more than somewhat impressive.  This is a portion of David's new gym in Stafford, England, which he described as, "a basic home gym, but plenty big enough for our needs.  We have plenty of old weights and barbells there which are used regularly and it's a pretty hardcore gym - no heating and no machines!"  IronMind® | Photo courtesy of David Horne.


Not just because he’s been winning grip contests, David’s been a busy man lately: moving, setting up his new gym, and training for armwrestling.

Explaining these grip competitions, David Horne told IronMind®, “The World of Grip Strongest Hands series has been orchestrated to bring in lots of new faces to grip contests.  The idea is that it's very accessible and not a daunting start for new participants and that old hands enjoy it too. It seems to have been a great success so far and hopefully will serve to increase the interest in grip competitions in the UK.  We are considering organising something along the same lines on a larger scale towards the end of the year.”

Here are the top three in each event, as well as the overall, from the second leg of the series.

For full details, please go to the World of Grip - Strongest Hands website.