The Diesel Crew's Jim Smith and Jedd Johnson said that their World Series of Grip booth was a big hit at the NAS Stronger Than All strongman contest this weekend. 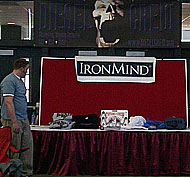 The Diesel Crew's Jedd Johnson (left) and Jim Smith hosted the World Series of Grip booth at the NAS Stronger Than All strongman competition this weekend. IronMind® | Photo courtesy of Jim Smith.

Jim Smith said, "[our] booth was busy all day!" with a crowd "before, during and after" the strongman events. And as part of the grip fun, both Robert "T.T." McCray and Ron Mazza qualified for the Rolling Thunder Nationals - Robert hit 220 pounds and Ron hit 210 pounds. Ron also "hovered the Inch" and closed a couple of No. 3 Captains of Crush® Grippers.

Watch for a complete report at the Diesel Crew website.

Jim Smith, who was running double duty as he competed in the strongman contest, said, "The [NAS] competition was huge, with 83 competitors, and April Ciaffaglione and her husband did an incredible job."

For the latest on NAS, and how you can get into strongman, please check the official NAS website.