Athens - Natalie Zabolotnaia (Russia) opened with a 120-kg snatch in the women's 75-kg category today, breaking both the Olympic and the Junior world Record, and she went on to break a total of eleven Olympic, Junior/Senior world records - and she took home the silver medal. 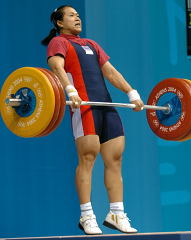 Pawina Thongsuk (Thailand) finishes her pull on this 150-kg clean and jerk, good enough for the gold medal, and an Olympic record in the clean and jerk. IronMind® | Randall J. Strossen, Ph.D. photo.

It was another night of blistering lifting and anyone keeping track of records was getting sore fingers from all the changes: This class produced 17 new Olympic/Junior or Senior world records.

Zabolotnaia opened with a bang again in the clean and jerk, by nailing 142.5 for Olympic and Junior world records in the total, and to give the lift even more attention, she power jerked it. Popova made 145 for her opener, good for an Olympic record in the clean and jerk, and Thongsuk handled the same weight on her opener to gain gold medal position. Zabolotnaia used a power jerk again to hit 147.5 on her second attempt, which put her in gold medal position and gave her the Olympic records in the clean and jerk and the total. It also gave her the Junior and Senior world records in the total. Popova took 150 on her second, going for silver medal position and the Olympic record in the clean and jerk, and after a good clean, she missed the jerk badly. Thongsuk took the same weight on her second attempt, in a bid to regain gold medal position and pick up the Olympic clean and jerk record as a bonus. She made a very nice lift, much better than her opener, and was back on top. Remember Zabolotnaia? She called for 152.5 to leapfrog back into first and pick up another bucket of records, but after racking the weight, she couldn't stand up with it. Popova, going for all the marbles, took 155 on her third attempt, but she missed the clean.