Athens - With a break in the weightlifting competition today, here is the latest word on the Supers. 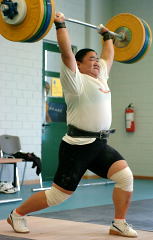 Yesterday, Ashot Danielyan (Armenia) was training, and unlike the other top Supers, who are playing their cards very close to the vest, Danielyan was relaxed and nonchalant about his training: He said he was weighing about 165 kg, and he told me that he had snatched 210 kg and cleaned and jerked 255 kg in training, so he appears to be in good shape for the competition. Rezazdeh, Jaber and Weller haven't arrived/surfaced yet, and as part of the final buildup, an air of secrecy surrounds their recent preparation for the biggest title in the strength world. Weller is said to have a groin injury, but it is not expected to be a significant factor in the competition, and he is scheduled to arrive here tomorrow. Nobody will say a word about how Jaber has been doing in training, but there is a definite feeling that he is ready for some huge weights, and speculation continues to mount that he might surprise a lot of people. Similarly silent is Rezazadeh's camp, but it is safe to say that the man who currently holds all three world records in the sport is ready to break them.

I watched Ashot Danielyan snatch an easy 180 kg in the training hall yesterday, and today watched Tang Gonghong (China) clean and jerk a routine 160 kg, which might be in the range of her opening attempt in the women's Supers.