Doha, Qatar - He had to come back from having his second attempt clean and jerk turned down by the jury, but he did, and the result was that Wang Shin-yuan (Taipei) won the men's 56-kg category at the World Weightlifting Championships tonight. 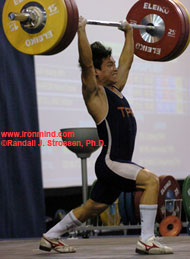 It caught at least this reporter by surprise to see the current Asian Weightlifting Champion Tuan Hong Anh (Vietnam) lifting in the B session, but there he was. Tuan hit a 122-kg snatch on his opener, missed 126 on his second attempt, but came back to make it on his third attempt. In the clean and jerk, Tuan also made his opener, 153 kg, but then he missed the jerk twice at 156 kg - misses that would prove to cost him dearly.

Later, in the A session, Li Zheng (China) missed his opening snatch, 122 kg, but then he came back for successes with 122 and 127 kg. Wang Shin-yuan made 122 kg for his opener, 125 for his second, but then missed 126 on his third, so, somewhat reminiscent of the famous Smorchkov incident, a B session lifter had medaled in the snatch.

Fast forwarding in the A session clean and jerk, Wang, who had succeeded with 153 kg on his first attempt, waited as Wu Meijin (China) made a good, but not easy opener with the 156 kg: Wu had to double bounce to come up with the weight and his split was wide and deep. Wang followed with the same weight on his second attempt, to put himself in gold medal position in the jerk and the total, had the lift passed, but then the jury reversed the decision, since Wang's left arm had unlocked on the jerk. Yang Chin-yi (Taipei), who had opened with a good 150-kg jerk, and followed with another good lift at 155, also missed 156 when he got under the weight, but couldn't stand up with it.

Wang came back for a very nice success with 156. Lee (Korea), smelling the possibility of a gold medal in the jerk, cleaned 157 kg strongly and moved quickly into the jerk, only to miss it. Wu, also looking for the gold medal in the jerk and the silver in the total, took 158 on his second attempt and came out of the bottom of the clean stronger than on his first attempt, only to slow down a lot on the final quarter of his recovery, and then he missed the jerk.

Wu repeated with the weight on his third attempt and made a tremendous effort to hold the jerk - staying under the bar so long that when it came crashing down, Wu was driven into the platform by the weight of the falling load.

Wang ended up getting the gold medal in the total with his 281 kg, followed by Lee with 280, and Tuan (remember Tuan?), who had 279, was good for the bronze, so if he had only held either of his missed jerks in the B-session, he'd have won the whole enchilada. And if that's still not close enough for you, fourth place went to Wu, with 278 kg, and fifth went to Li, with 277 kg.