It's the moment that grip guys have been waiting for, the showdown between such top names as Laine Snook, Karl Gillingham, Mark "300-Pound" Felix, Odd Haugen, Magnus Samuelsson and . . . you?! 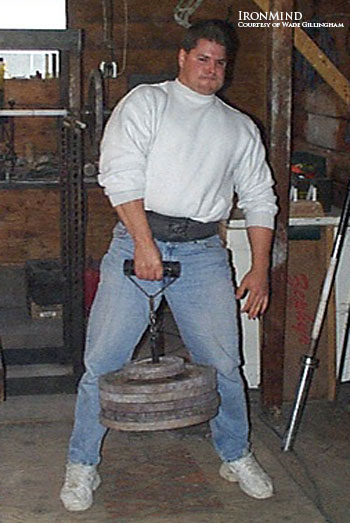 Its roots go back to Green Bay Packer great Gale Gillingham's garage, no less, and the tradition of typically-but-not-always large men lifting huge weights on the Rolling Thunder® went on to become a signature kickoff event at Odd Haugen's Beauty and the Beast strongman competitions in Hawaii, where the IronMind® Rolling Thunder® World Championships drew the mightiest competitors from around the planet.

On January 18, WSMSS will host the 2008 IronMind® Rolling Thunder World Championships, setting the stage for the launch of the WSMSS 2008 tour, at the Mohegan Sun Grand Prix.

Consider that the field includes such proven top performers as Karl Gillingham and Mark "300-Pound" Felix, and you know that you can expect big things to happen. There's more, though, because with guys like Terry Hollands, Mariusz Pudzianowski, Jessen Paulin and Brian Shaw also set to compete in the WSMSS Mohegan Sun Grand Prix, there are some real threats to Rolling Thunder® supremacy. Also saying he will be on hand to join in the Rolling Thunder World Championships is Odd Haugen, and if that's not enough, Laine Snook, the current world record holder, said he will be coming over from England to defend his position as king of the hill.

Need more? World's Strongest Man winner Magnus Samuelsson, who is certified on the No. 4 Captains of Crush® Gripper and who regularly includes the Rolling Thunder in his exhibitions - usually putting two 20-kg plates on top of the best lift by anyone in the audience - is going to try to be there, too.

We can't say for sure who will take away the title and major bragging rights in the grip world, but if the world record isn't threatened by this crowd, it never will be.

A good time is guaranteed for all and to show IronMind®'s confidence that the 300-pound barrier is going to be under extreme seige, the winner is going to take home US$300 cash. Second place gets US$200 and third place pays US$100.

And just because you're not a world-class strongman or a proven world-class grip guy, walk-ons will be allowed to compete: show us that you can haul up 220 pounds (100 kg) on site, and you can enter.

So how do you like that? Here's your chance to take the title, pick up the cash and be able to tell your wife and kids about the time you whipped Mariusz Pudzianowski and the rest of the guys.

Stay tuned for more details, but for now, remember this: WSMSS will host the 2008 IronMind® Rolling Thunder® World Championships on January 18 at the Mohegan Sun.