Saying that the "the World's Strongest Man Super Series 2007 tour is done and dusted," WSMSS managing director Jesper Albansson summarized the year for IronMind®, and also provided a schedule of the upcoming TV shows. 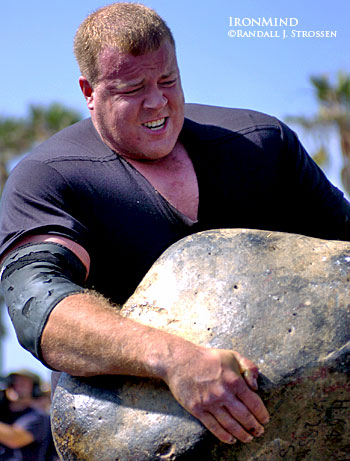 Dave Ostlund won the WSMSS Muscle Beach Grand Prix this year and went on to compete at the 2007 World's Strongest Man contest. See Dave Ostlund and other top competitors from the professional strongman circuit on the upcoming television shows, and mark your calendars for January 19 at the Mohegan Sun. IronMind® | Randall J. Strossen, Ph.D. photo.

"Three great events were held at three unique venues," Albansson reported. "First out was the classic Super Series venue, Mohegan Sun Casino & Resort. As always the atmosphere was amazing, with roaring Polish and American fans in the stands. At times it felt like we were in Poland, not in Connecticut, USA. Mariusz Pudzianowski once again walked away with the Grand Prix title, but Kevin Nee was not far behind. Moreover, we also got to see an international breakthrough by Jason Bergman, who took one of the WSM qualifying spots in his first international competition - well done Jason!

"The drama in the second Grand Prix played out on Venice Beach, or actually on Muscle Beach, which is a more accurate name of the place. Once again, great names in the sport had gathered to battle for the top spots. Most people probably put their money on the great Mariusz, but this time we were to see an American - Dave Ostlund - lift the golden trophy. In a very dramatic final event (Thule Atlas Stones), Dave beat Mariusz and walked away from the event as the Grand Prix winner.

"The third and final Grand Prix of the season was held in the land of the Vikings, up north in Norway, organized and hosted by Svend & Lene Karlsen. This event was special because it was viewed as the big international comeback of two great strongmen - Magnus Samuelsson and Jarek Dymek. When the dust had settled, they had both reached the podium and were awarded spots in the 2007 World's Strongest Man.

"We look back at a very interesting year with a lot of action on beautiful locations, impressive athletic performances by veterans and newcomers, all of which was shot for television and soon to be aired on a channel near you.

"Despite all this, the passing of our dear friend Jesse Marunde overshadows the year 2007. He set an example to the rest of us and his spirit and inspirational persona will always be remembered by the Super Series team and the strength community."

And here is the broadcast schedule on Five and Eurosport:

November 30: Strongman fans in Europe can enjoy a double feature of the WSM Super Series Mohegan Sun Grand Prix as both Channel 5 (UK) and Eurosport will air the show.

"Channel 5 will then continue to air the Super Series on prime time the following Fridays, and Eurosport will air and re-air the shows several times leading up to Christmas," Albansson told IronMind®. 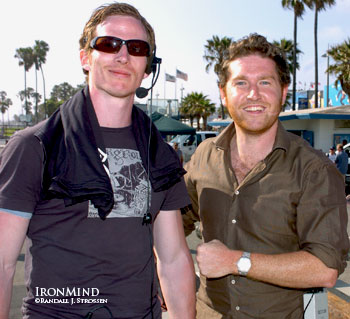 Jesper Albansson (left) and Andy Quinn (right), on location at Muscle Beach, look like they're not suffering too much as they make the very WSMSS TV show you are about to see. IronMind® | Randall J. Strossen, Ph.D. photo.