He's not like the bodybuilders who measure their arms 10 times a day: When asked what he's weighing at the moment, Karl Gillingham paused a while and then said, "Probably between 305 and 310 . . . I don't worry about it." 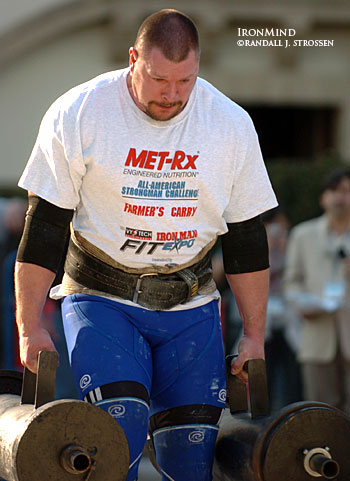 Karl Gillingham at the FitExpo, earlier this year. Karl won the contest and he says that right now he's in that kind of shape. IronMind® | Randall J. Strossen, Ph.D. photo.

World's Strongest Man is returning to the US this year for the first time in a decade, and Karl said it's a huge advantage for the American competitors, so rather than being worried about the impact of long travel distances, massive time zone changes and unfamiliar food, Karl is free to focus on his training.

And given the nature of World's Strongest Man, contest preparation can be a little different than it would be for most of the strongman contests Karl competes in - speed and technique, along with strength, will figure prominently into doing well, and in some events, Karl said, times will be close enough that even a slight fumble could cost one dearly. Besides his basic gym training and event training, Karl said he's doing specific cardio training, which includes riding a mountain bike and walking up and down hills.

Karl said his back is still a little touchy at the moment, but that overall, he's feeling the best he has since he won the big strongman contest at the FitExpo earlier this year. And with his bodyweight up just a bit from last year, it seemed reasonable to guess that his strength has followed suit.

"I'd like to think that it has," Karl said, and all his fans will be hoping that with a couple of strong performances already under his belt in Southern California this year, maybe the hat-trick is on its way.