“We have a big success in Abu Dhabi: WSF as organizer in cooperation with Asian Strongmen Federation and Dar Al Hai present this contest in UAE: 2012 WSF World Strongmen Championship under the patronage of His Highness Sheikh Hamdan Bin Mahammed Bin Hamdan Al Nahyan will be broadcast on Abu Dhabi Sport TV live all days and on Dubai Sport TV there will be 3 programs,” WSF founder Vlad Redkin told IronMind today. 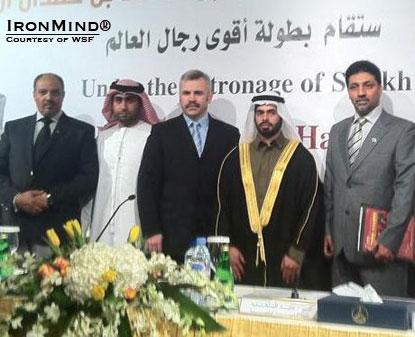 
There have been some changes since this contest was first announced and here are the latest details.

There has been a story floating around the internet describing this as the World’s Strongest Man contest, which, of course, it is not, so IronMind asked Redkin to address this error, which might stem from the loose use of the words World’s Strongest Men on the ASF (Asia Strongmen Federation) website.

Clear that he understands the difference, Redkin told IronMind, “I am not using the WSM logo and in my opinion, WSM is the most famous competition in world and I would be happy to work with this greatest competition.  [It would be an] honor for me to receive possibilities to organize a qualification tour in the future!”

Regardless of whether that happens, though, Redkin is pleased with what he has accomplished so far with the 2012 WSF World Strongmen Championships:

“We are waiting our celebration!  A lot of people will come and see this contest.  It will be first time in Abu Dhabi and we have as our special guest Rafael Santonja, IFBB president, who will come and support us as our friend!"