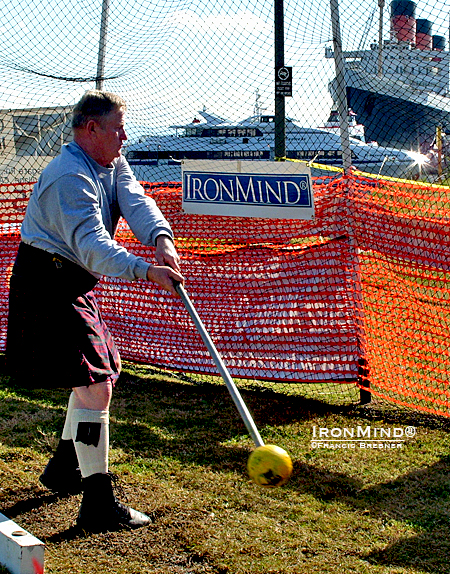 The 2011 Highland Games season got off to a great start in Southern California with 66 athletes competing at the 18th annual Queen Mary Highland Games this past weekend in Long Beach.

The weekend's weather was perfect for record-breaking performances despite a very brief downpour of rain that did not dampen the athletes' sprits in the least.

The highlight of throwing over the two days came from the masters' division.  Vern Alexander, a four-time winner of the Masters' World Championships in the +60 category and now at the well-developed age of 70, proved he was still a force to be reckoned with.  He faced off against his longstanding rivals once again and rewrote the pages of Highland Games history by
producing four masters' world records in a single day, a feat practically unheard of.

In the 28-lb. weight-for-distance, Vern pulled out a winning throw and astounded the large crowd with yet another world record of 44' 10-1/2", crushing the old record of 40' 6".  Now with three new world records established, all eyes were on Vern as he prepared for the 42-lb. weight-for-distance.  Vern did not disappoint his growing fan club that had been cheering him on throughout the day.  He notched up his fourth world record-breaking performance as he added more than 1' to the old record of 26' 6" with the new distance of 28' 7-1/2".

Asking Vern how he felt about setting four new world records in one day, Vern replied, "It hasn't sunk in yet.  This is something that I thought I could possibly do over the course of the season.  The distances are more than what I ever thought I would have achieved in my first competition of the season."

Asking Vern about his training over the winter, he replied, "I am very active and keep myself in shape.  I still work around my two-acre property and walk up to five miles every day and eat very healthy.  I think my lifestyle definitely helps in keeping myself in good form and is what has helped me produce my record performances.

"I am somewhat surprised at my throwing in the light hammer, as I am throwing it farther than what I have done in the last four years."

When asked about what keeps him going in the sport, Vern said, "I have been competing now for seventeen years and most of the athletes I compete against are like family.  It's great to get out there and compete with them and above all it's the atmosphere of the Games for me.  It's just fantastic."

When most men Vern's age are sitting down to a cup of tea while reading the paper or vegging out watching TV, this is something you won't find Vern doing as this old war horse is out in the field lifting and throwing around weights.  Just like a fine wine, Vern Alexander seems to be improving each year, with a lot more to come.

In the next event, the weights-for-distance, the title of the USA Amateur Combined Weights for Distance Championships was up for grabs.  The 28-lb.weight for distance was a close event between O'Neil and Ullom, with O'Neil coming out on top at a winning distance of 66' 2-1/2" over Ullom's 65' 2".  Imboden was hot on his heels at 64' 7" for third place.

In the 56-lb. weight-over-the-bar, O'Neil had another victory with a winning height of 13'.   Second place ended in a tie between Austin and Ullom at 12'

The final event of the competition was the caber, an 18' 6" long and 91-lb. stick, which O'Neil turned on all three attempts, with his best a perfect 12 o'clock toss.  In second place Bailey, also with 12 o'clock, and in third place was Jones.

Asking Dave Garman, the president of the SAAA, for his thoughts on the weekend's  performances, he replied, "I am very happy with the throwing in all weight divisions.  It has risen considerably from last year.  It was thrill to watch Vern Alexander at the age of seventy still competing at a very high standard in his age category and showing us how it's done by establishing four new world records at the Queen Mary Highland Games-the man is just incredible to watch.  The SAAA and its officials were very efficient in verifying the weight of each implement on the spot, which I also recorded."