Shane Hamman, coming off a pair of American records at the Olympics, says he might be retiring from weightlifting, but even if that happens, the big man has big plans. 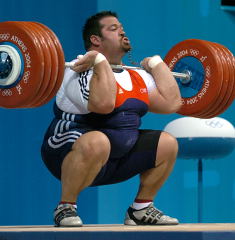 USA Weightlifting cover guy Shane Hamman hits the bottom with with this 237.5-kg clean and jerk at the 2004 Olympics—the biggest clean and jerk ever by an American, and Hamman made it look light (Athens, Greece). IronMind® | Randall J. Strossen, Ph.D. photo.

Shane Hamman is one of the few people who have successfully crossed over from powerlifting to [Olympic-style] weightlifting. The 8-time national champion holds all three American records in the superheavyweight class, and his 237.5-kg clean and jerk at the Athens Olympics will be remembered not just for the fact that it was an American record, but also for how easily Hamman handled the weight.

The two-time Olympian said he might be retiring from competition, but he even if this happens, he will stay involved with the sport as he and Dragomir Cioroslan plan to open a 24-Hour Fitness facility, with platforms for Olympic-lifting, in the Oklahoma City area. Hamman is also an in demand speaker, looking at about 50 talks next year, as he regularly addresses school and church groups.

Asked about his transition from powerlifting to weightlifting, Hamman said that he was attracted to the sport immediately when he saw his first contest - the professionalism, the athlete squaring off against the bar alone, and the possibility of competing in the Olympics were big draws.

Hamman has been recruited to compete in strongman contests, including the 2005 Arnold, but he says he's not interested, since it isn't something he trains for. Currently, Hamman still includes some weightlifting movements in his workouts, but he is also doing things as diverse as running, and has trimmed down to the neighborhood of 330 pounds.