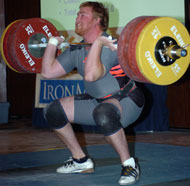 Casey Burgener on his way up with 210 kg. Burgener went six for six, had a 10-kg PR, and made the World Championships team. IronMind® | Randall J. Strossen, Ph.D. photo.

Even though she had made three good snatches, ending with 97.5 kg, Heads had things in the balance until the last minute, as it took her three tries to make 115 in the clean and jerk.