Dione Wessels, head of the newly-formed American Strongman Association (ASA), said that she has basic structure outlined for the 2005 competition schedule. 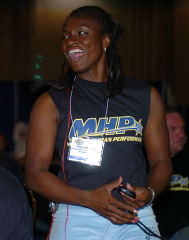 Dione Wessels played a key role in keeping strongman contests going in the US this year, for the pros as well as for the amateurs. IronMind® | Randall J. Strossen, Ph.D. photo.

The goal, Dione Wessels said, is to hold four qualifiers in the US next year, and the national championships are planned for late May or early June.

Dione Wessels was instrumental in getting American professional strongman a replacement contest for the national championships that suffered a series of crashes as the wheels came off IFSA-USA and as this year's selections for World's Strongest Man competitors were made before a (professional) US Championships had been held. Wessels also helped run the NAS Heavyweight Nationals this weekend: NAS opens strongman competition to just about everyone and its top competitors graduate to the professional level (Jon Andersen and Van Hatfield, for example, are NAS alumni), and this is the group, Wessels said, that sold the tickets for the GNC Show of Strength.

Both strongman contests - the professional and the amateur - were very popular this past weekend, and while the pro show was the de facto US National Championships, Wessels explained that Canadian strongman Geoff Dolan had been invited to compete as a guest (Geoff lives in the US), although his points would not count toward the placings, and, as it turned out, Geoff's great performance would have netted him third place had he been a regular competitor.

Strongman is on the move in the US and around the world, and especially for US-based competitors, watch the official NAS website for announcements.