"This weekend at the UK Tribute Team strongman championships, Laurence Shahleai and Rob Frampton set a record, we believe, in the two-man deadlift," Tom Jones reported to IronMind® yesterday. 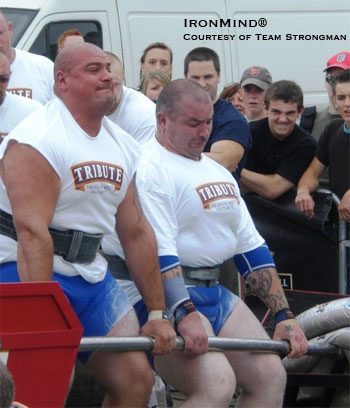 Back to Tom Jones's original report, here's how he called the action: "Lifting using a solid 2-inch bar, Big Loz (building up for his appearance at the World's Strongest Man competition) and Rob (a UK Strongest Man finalist) pulled 740 kg for the win in the event. With the solid bar you have no flex, so the men feel the full weight from the very start of the lift. What's even more amazing is that Rob pulled this weight with a fractured arm!"