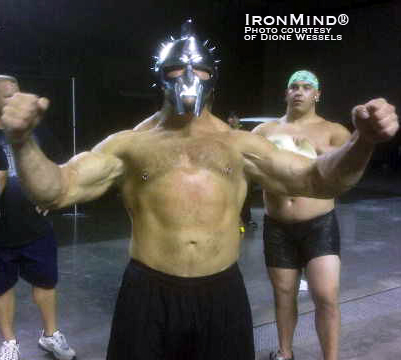 
“The contest came down to the last event with a small separation in points,” ASC president Dione Wessels reported to IronMind® last night.  “Travis won the stones with Palmer in second.  Mike Jenkins had a great showing in his first pro event."

Wessels confirmed that "the top 11 qualify for America's Strongest Man®" competition coming up later this year at the Mr. Olympia contest.

Asked about the mask given to contest winner Travis Ortmayer, Wessels told IronMind®:  "The mask is a trophy.  The census from athletes was they want more unique trophies with a gladiator flair.  LOL."

Not just a hit with the athletes, the competition enjoyed rock solid community support as well, explained Wessels:  "The people in Hot Springs were amazing and true fans!  It was nice to be in arena with about 4,500 fans screaming for strongman."

Here are the top eleven places and points, officially:

For more details on this competiton and the full calendar of American Strongman Corp events, please visit the official ASC website.