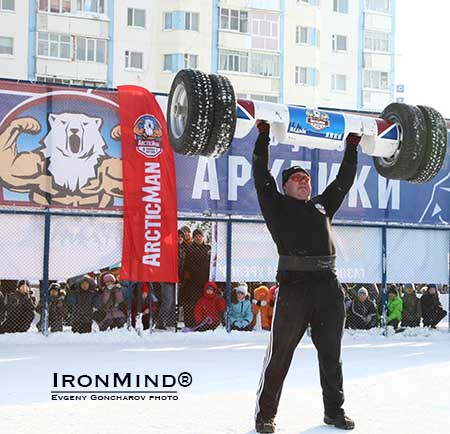 The debut of ArcticMan enjoyed relatively balmy weather in Nadym, Russia: it was about 12 degrees Fahrenheit.  IronMind® | Photo courtesy of Evgeny Goncharev

Last Saturday in Nadym in Russia near the Arctic Circle was ArcticMan strongman contest. It was Russia's first outdoors Strongman competition in the Arctic.
For all participants, this was a good day. Weather gave mercy: the temperature was -11 degrees C [12 F], although a week before the tournament was cold -45 C [-49 F]. Also, the tournament was held without injury about which feared referee Misha Koklyaev.

This exotic competition attracted the attention of the crowd of townspeople and aboriginals of this region (their name is Nenets). Nenets sincerely admired the size and strength of the participants, and they respectfully called Misha "Tovarisch Koklyaev.”

Records in the tournament were not established. It is winter and the Arctic Circle, so many participants noted that they are unusually rapidly losing their strength during the events. Nevertheless, here are the winning results in some events: Ivan Lykov 7 reps in Log lift, Rustem Satvalov 11 reps in Jeep Deadlift and more than 2.5 turns Conan Circle, Evgeny Markov 62.6 m in Farmer’s Walk and Valery Chernozubov 24.73 sec in Arm-over-arm.

As a result, contrary to preliminary forecasts, ArcticMan Champion's Belt was won by the rookie from Omsk, Evgeny Markov.

The main objective was to test the maximum human force in the Arctic. This work will hopefully continue. At the closing ceremony, local authorities and citizens and the Nenets have confirmed that they want ArcticMan in Nadym each year.
So Russian opponent for SCL IceMan Challenge, with full respect for the prototype, moves on. 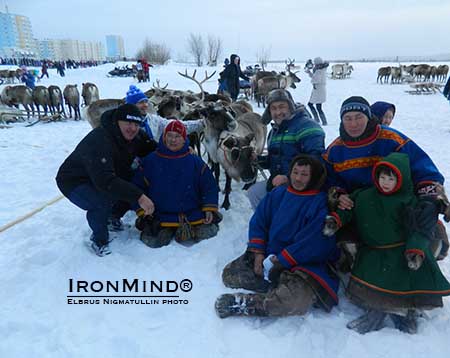 The personable Misha Koklyaev quickly bonded with the Nenet people who are native to this area and they honored him by addressing him as "Tovarisch Koklyaev” [Comrade Koklyaev].  IronMind® | Elbrus Nigmatullin photo