Part of the standard procedure for getting certified on the Red Nail is that IronMind sends three Red Nails to the referee it has selected and then the candidate can choose any one of them for his official bend, done in less than a minute—Tommy Jennings Jr., being a Texan, did it up big as he knocked off all three well within the time limit. 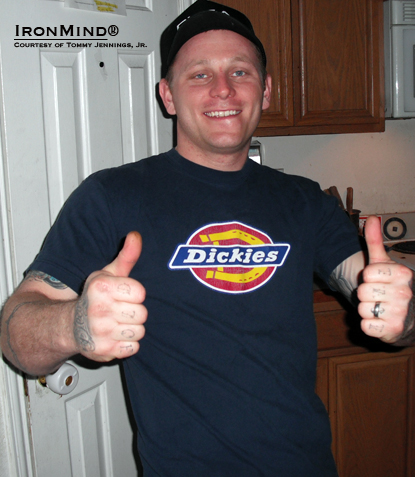 Smile for the camera: Tommy Jennings, Jr. left no doubt about his ability to officially bend an IronMind Red Nail as be knocked off three in a row easier than some people blow out birthday candles.  IronMind® | Photo courtesy of Tommy Jennings, Jr.


“After being introduced to IronMind grippers, I had originally planned on becoming a CoC [Captains of Crush] as soon as I saw that IronMind had a certification list.  As it turns out, I’m quite the short steel bender and ended up with a Red Nail cert first.  lol," Tommy told IronMind.

Tommy is in the Navy Reserves and works as an auto technician: “Being that I work every day in the shop, hand and wrist pain is commonplace.  The grip/lower arm strength training helps keep the pain minimal and the hands strong while on the job.

“Paul Knight and Eric Milfeld introduced me to short steel bending in January this year during some grip training. They put me to work on a few different pieces of stock and I bent everything they handed me that day.  It was those fellas who undoubtedly founded me as a bender and led the way.”

Special thanks to Paul Knight for serving as Tommy’s referee and congratulations to Tommy—now that he’s officially on the Red Nail Roster we hope he gets a part in a major movie because he owes his wife a makeover of her kitchen: inspired by a humorous Magnus Samuelsson commercial, Tommy apparently bent a lot of her utensils.