Known for his animated performances at the arm wrestling table, Tom Nelson had an easy time of things as he dominated the Nevada County Fair Arm Wrestling Championships today - calmly walking through his matches, the whole time remaining remarkably calm and quiet. 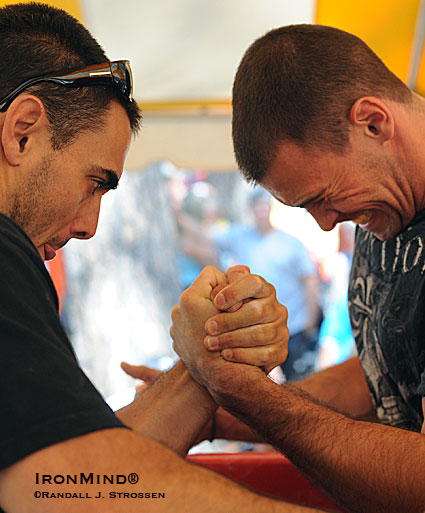 Put on by Bill and Ginger Collins’ Armworld Promotions, this was part of the arm wrestling tour that includes stops at a number of California locations.  California is home to some of the world’s top arm wrestlers, and the Collins’ contests showcase the sport throughout the Golden State.

The Nevada County Fairgrounds is known as one of the country’s most beautiful, and another gorgeous Northern California day combined with the rural, small-town county fair ambience to showcase some spirited action at the arm wrestling table, which drew quite a crowd - with nobody being shy about cheering for their favorites.