"The World's Strongest Nation was a great event," Marcel Mostert told IronMind®. "We did 22 events in three competition days!" 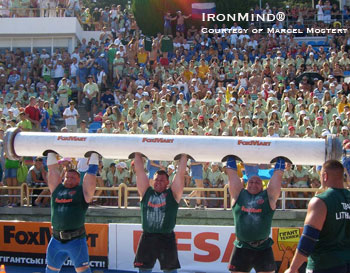 Overall, there were eight teams, with 32 athletes in total.

"It was hot, 32 degrees Celsius (about 90 degrees Fahrenheit), and there was a great atmosphere in the stadium with 7,000 seats. The crowd really loved the competition and got outrageous.

"Team Lithuania won; they were one point behind Russia in the 22nd event, but they won the squat and came equal, but even though they had same points, Lithuania had more wins," so they got the overall victory.

Here are the overall results from the finals: