"Every great man strongman has to come to Scotland," Douglas Edmunds told IronMind. 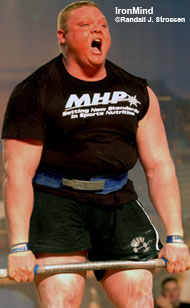 If it's not nailed to the ground, Benedikt Magnusson can probably deadlift it. IronMind® | Randall J. Strossen, Ph.D. photo.

As an indication of his point, Dr. Edmunds mentioned that Mikael Koklyaev, Benedikt Magnusson and Kyrylo Chuprynin were all there at the moment.

Koklyaev has lit up the strongman world since Edmunds first spotted him, and his seminar in Glasgow, Scotland earlier this week - in which he cleaned and jerked 240 kg, deadlifted 400 kg, muscle snatched 150 kg and front squatted 260 kg for a triple - has caused a near tidal wave of praise. The 23-year-old Magnusson, yet another great Icelander, is a huge deadlifter who is also ready to make his mark in strongman, and when he talks about doing a 450-kg deadlift, you believe he will do it. Kyrylo Chuprynin is poised to debut at Pleasanton in the Highland Games World Championships in a few weeks and Pleasanton's Athletic Director, Steve Conway, says "Kyrylo is probably the first Ukrainian athlete in the Highland Games. He is a two-time Olympian in the discus."

Hammering his point home, Edmunds said, "I can't think of a World's Strongest Man winner who hasn't been here."

Edmunds said that he always favored Olympic lifters for strongman and one of the things that has been interesting to him is that Koklyaev says that strongman helps his lifts - a different twist on the idea that weightlifting helps performance in strongman.

Particularly as Koklyaev spends more time in Scotland, winning at least an occasional bottle of whiskey from Edmunds in one friendly wager or another, the two have become close, and Edmunds likes to compare their friendship to the one he had with the late Jon Pall Sigmarsson, a legendary figure in strongman.