Six-time Canada's Strongest Man winner Hugo Girard calmly said, "I feel pretty good," going into this weekend's contest - besides the Canadian national title being on the line, so is a trip to this year's World's Strongest Man contest, the crown jewel of the professional strongman circuit. 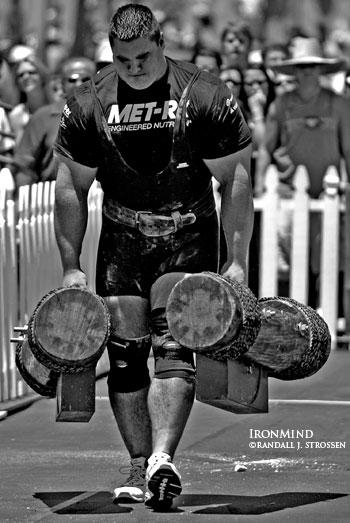 Even among the giants of strongman, the mastodonic Dominic Filiou stands out. IronMind® | Randall J. Strossen, Ph.D. photo. Reprinted from MILO with permission.

At the moment, the prevailing thought is that the winner of Canada's Strongest Man contest will be invited to the World's Strongest Man contest next month, and the runner-up will go as a reserve; however, another possibility is that the top two finishers could both be invited as competitors, but at this point, it's all speculation because until TWI announces its decision, nothing is official.

While this too remains an unofficial opinion, IronMind® thinks it is likely that the World's Strongest Man heats will be announced very soon - maybe as early as next week - defining the field for what is expected to be a very dramatic series of qualifying events, leading up to the most coveted title in strongman.

Thus, in a very real way, the final run-up to the 2007 World's Strongest Man contest starts tomorrow . . . in Canada . . . so pick your favorite and get ready to cheer him on.

Paul Ohl - whose credits include a masterful biography of the great Louis Cyr (Louis Cyr: une épopée légendaire) handily sums up the situation: "Let's just say that this will be quite a showdown."

Here are Paul Ohl's profiles of the top competitors:

Dominic Filiou: Best ever Canadian at World's Strongest Man (third place in 2005) behind Tom Magee (who was second behind Bill Kazmaier in 1982 ).

The action begins tomorrow and continues on Sunday.