They're back from the Land of Fire and Ice, and IronMind® is very fortunate to have just received this report from Dr. William Crawford. 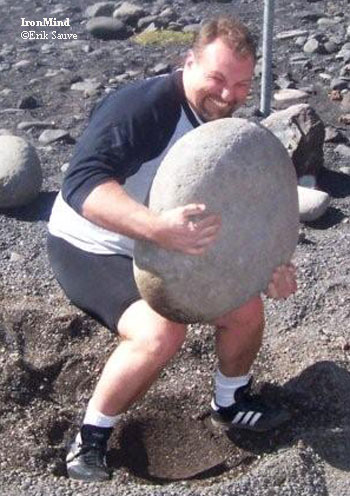 Bill Crawford with the largest of the Dritvik Stones. IronMind® | Erik Sauve photo.

We are back from Iceland and what an epic journey. We stayed with Petur Gudmundsson and he put us up in style as well as feeding us traditional Icelandic fare. On Saturday, we met Hjalti Arnason and took us to Jon Pall's grave. Hjalti then drove us through the neighborhood were he and Jon Pall grew up. We then saw the Jon Pall documentary at Hjalti's house. Wow, what a great movie! Truly a labor of love by Hjalti.

"On Sunday, we drove to Grundarfjordur and met Geirmunder Vilhialmsson, a friend of Petur's who had lifted the Dritvik Stones many times, and his son who is a strongman went as well. We went to Dritvikto lift the stones and a reporter from the Reykjavik newspaper Morganbladid came to file a report. The largest of the stones was very heavy and very, very smooth. I was able to lift the largest stone and stand with it, truly the most defiant stone I have ever lifted. The largest of the Dritvik Stones is an unheralded superstar of testing stones.

"On Monday, we went to Husafell to test ourselves with the ultimate crucible of testing stones, Kviahellan. I was a little worried because we had lifted a Husafell replica that Hjalti showed us on Saturday then completely spent ourselves lifting the Dritvik Stones on Sunday and here we are on Monday in Husafell.  I was able to carry Kviahellan completely around again in full-sterkur style.  The heavy and frequent training paid off to prepair me for that schedule. We got video footage of the carries well. 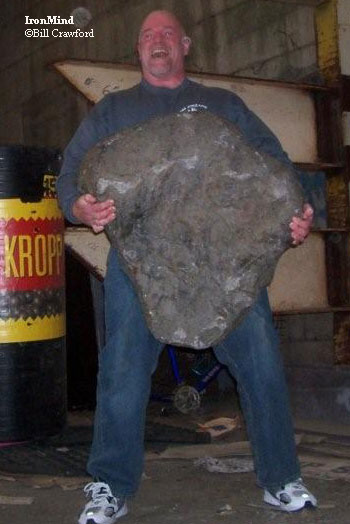 "We drove back to Reykjavik and Petur arranged for us to meet Magnus ver Magnusson while he was training, an added bonus to the trip.  We ran into Stefan Solvi Petursson, one of the top strongmen in Iceland, who knew we were coming to Iceland after seeing us on the IronMind® website.

"Petur has invited us back to go to the Western Fjords to lift another set of heavy testing stones, so we will be back and look for Petur to show me how to lift stones. There can never be enough stones. We met Andreas, Petur's brother and he has a pair of frightening hands, no doubt a key to his great strength.  Basically, there are lots of very powerful Icelanders, whom I feel are the strongest people in the world.  Just my opinion.

"Anyway, an epic journey. A full report to follow for MILO®. 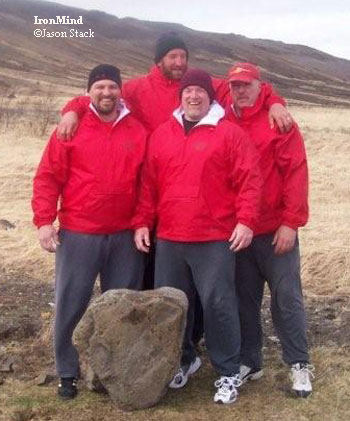