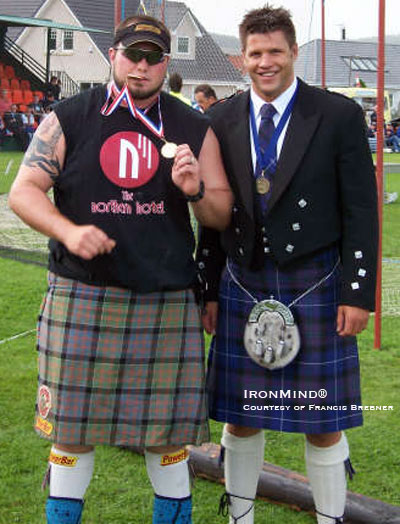 Larry Brock gets his minerals after winning the the British Heavyweight (Highland Games) Championships. IronMind® | Photo courtesy of Francis Brebner.

"It was a fantastic competition at the Bridge of Allan Games in Stirlingshire, Scotland," said Larry Brock, "with a packed crowed of 10,000 spectators watching us throw as well as superb weather, which made it spot-on for throwing."

The British Heavyweight Championship got off to a good start with the 16-lb. open shot, and Aaron Neighbour from Melbourne, Australia, took the first event win with a putt of 50' 3"; in second was Scotland's Bruce Robb at 49' 6" and in third, Scotland's David Dowson at 49' 2".

For the British Championship title in the 56-lb. weight over the bar it was a fierce battle that was finally won by Neighbour with a toss of 15' 6"; Brock was second and Robb was third.

After all the points were tallied, it was confirmed that Brock had indeed won the British Heavyweight Championship, with only one point separating the top three athletes, adding another title to Brock's very fast-growing collection.

Larry Brock added, "One of the highlights of my trip to Scotland was the Aboyne Games and Bridge of Allan, but nothing can compare to the chance to go to Bill Anderson's house and visit with him for a little while after the Aboyne Games.  He is one of the greatest guys in the Games.  I really enjoyed the Northern Hotel and all they did for us, sponsoring us while we were on tour of the Scottish Games.

"I am very happy to be bringing back the British Heavyweight Championship title. Now I am looking forward to Pleasanton and the IHGF World Hammer Championships and will try and hold onto my world title that I won last year."