Terry Hollands, Karl Gillingham and Odd Haugen have signed on for the Gaspari Nutrition Strongman Challenge featured at the bodybuilding.com Los Angeles Fitness Expo, marking another step forward for this strongman contest that began as an all-American contest and has grown into an international event. 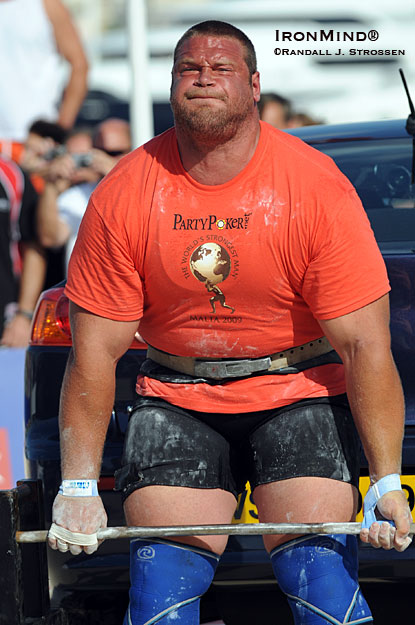 England's Terry Hollands - a World’s Strongest Man star - is one of the strongman competitors you can see at the Los Angeles FitExpo.  IronMind® | Randall J. Strossen photo.


Featuring strongmen who have been on the podium at the World’s Strongest Man contest as well as some up-and-coming stars in the field, the Gaspari Nutrition Strongman Challenge has gone from a contest focussed on the top American strongman competitors to one that now includes top international strongman competitors as well.

England’s own Terry Hollands, a former rugby player turned strongman, has been on the podium at the World’s Strongest Man contest, and he is now on the start list at the Los Angeles FitExpo.  Karl Gillingham, a former winner of this contest, has signed up for a return to action, and as for Odd Haugen, he turns 60 a week before the contest and rather than bask in his AARP privileges and senior citizen discounts, he’s ready to chalk up and lift.

“All the others were just birthdays, but this one . . . it sounds unbelievably old.  I still feel as if I am 30-something, but 60 sounds ancient,” Haugen told IronMind® today.