Today in the finals, it is Team UK against Team Ukraine. 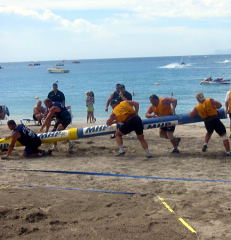 Here's a shot of the Pole Push at the All Nations Challenge taken earlier this week. IronMind® | Dione Wessels photo.

Today in the finals, it is Team UK against Team Ukraine. Team Ukraine went first on the Island Stones. They were not only flawless, but also quick. They finished all six stones in a record time of 137.07. Team UK had a bit of flaw on the stones, but still managed to load all of the stones in a time of 212.07 for second in the event.

The third event is the Four Man Sudan Walk. Team UK goes out and sets a good mark with a time of 32.70 seconds. This time also beats the record setting time that was set by Team USA on Wednesday. Team Ukraine also looked flawless, and had one set down, so their time of 35.23 was not enough to beat Team UK. The score is now two to one Team Ukraine.

Event four is The All Strength Stone Carry. Team Ukraine starts with Michael Studoff (sp). He finishes with a little over 200'. Vasyl is the second man on the stone and finishes with an overall distance of 385'. They leave a big opening for Team UK. Team UK starts off with Mark Felix who goes over 200'. Brian Turner finishes the course with a win for his team, and finishes at 450'.

The next event is the wt. for ht. Team Ukraine finishes with 4 implements in a time of 38.49 seconds. Team UK comes out and also only gets four implements, but in a time of 39.21 seconds for second place in this event.