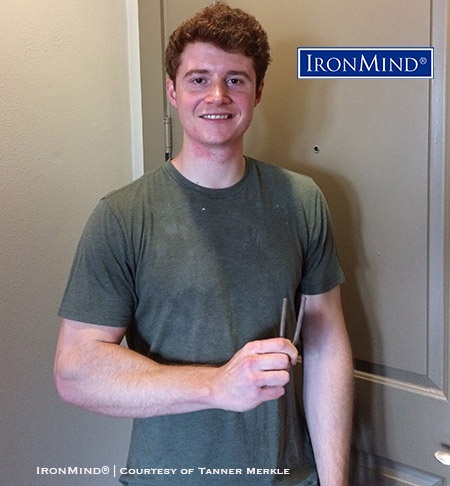 With 12 years of competitive rock climbing under his belt, Tanner Merkle’s transition to steel bending was pretty seamless—he told IronMind that he bent a Red Nail on his first attempt and now that he’s done it under official conditions, he’s been certified and his name added to the Red Nail Roster.

Tanner Merkle, a competitive rock climber who works as a respiratory therapist, has just been certified on the IronMind Red Nail—making it official that he’s a steel bender to be reckoned with. IronMind® | Courtesy of Tanner Merkle

Tanner is 25 years old, 6-feet tall and weighs 175 lb. He works as a respiratory therapist and if his mastery of the Red Nail sounds impressive, consider that he started competing in grip contests earlier this year and won the 2017 National Association of Gripsport Championship (NAGS) overall title. Grip guys are going to be interested in seeing Tanner try his hand at the CoC Silver Bullet and Rolling Thunder, as well as a couple of other benchmark events in the grip strength world, and the smart money is likely on Tanner to excel.

Nice work, Tanner, and many thanks to Daniel Sweeney for refereeing on Tanner’s official attempt to bend a Red Nail.