Athens – Forget about four hundred pound clean and jerks just being the province of strong men, because Tang Gonghong (China) says that strong women can also reach this level, and she's got an Olympic gold medal to prove it. 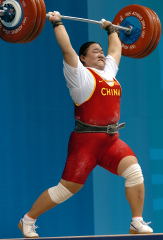 Things did not get off to an easy start for Tang Gonghong tonight, as she missed her opening snatch, 122 kg, came back to make it on her second attempt, but then missed 127.5 kg on her third. Jang Mi Ran (Korea) and Agatha Wroebel got off to much better starts, both hitting 125 on their openers, 130 on their second attempts, before missing 132.5 on their third attempts.

Anyone who has seen Tang knows she has a huge clean and jerk, and at this point it already was clear that she would need it for the win, but before the night was over, the pressure would mount even more. Of the leaders, Wrobel opened first with an easy 160 kg, and then Jang made a very strong 165 kg opener. Wrobel took 167.5 on her second attempt, going for gold medal position, but got dumped by the weight. Trying to boost her lead, Jang made what looked like a great lift with 170 kg on her second attempt, only to lose the jerk behind at the last moment. Wrobel called for the same weight on her third attempt, eyeing gold medal position again, but in a situation reminiscent of what happened in Sydney, she choked and only deadlifted the bar.