Athens – This class had it all—Olympic champions, world champions, world record holders, and a list of starting weights that looked like big time gridlock—but leave it to the guy who came holding all the junior world records, Turkey's Taner Sagir, to show who rules the roost. 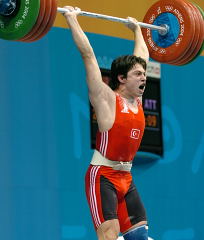 Among the top lifters in this class was two-time Olympic gold medalist Zhan Xugang (China), who was looking to three-peat, but couldn't get 157.5 to stay overhead in the snatch, so he went out.

Sagir came into the Olympics with the junior world record in the snatch (and the clean and jerk, and the total), and he was going to square off with Sergei Filimonov (Kazakhstan), who came in holding the senior world record in the snatch. Both opened with 165 and while both made good lifts, they were strikingly different: Sagir moved under the bar with unbelievable speed, while Filimonov is just plain silky smooth. Another big gun in this class, Oleg Perepetchnov (Russia) had blown up 165 on his first attempt like he was a piston running on high octane fuel, and maybe deciding to play it cautiously, he went on to make 167.5 and 170, always looking like an explosion waiting to happen. Sagir ripped up 170 on his second attempt, for an Olympic record, and then moved it up another notch with his successful 172.5 third attempt. On each lift, Sagir roared, like he was ready to devour not just records, but also anyone in his path. Filimonov, who had missed 170 on his second attempt, came back to make a very nice 172.5 on his third.

Sagir put an awesome amount of energy on display with his 200 kg opening clean and jerk, for the gold medal position and Olympic and junior world records in the total. Perepetchenov, who had opened with a very strong 195, missed the jerk on 200 after a remarkably easy clean. Filimonov, who had marched through 195, handled the same 200 without a problem. Sagir's second attempt, 202.5, wasn't just a good lift, or one that gave him an Olympic record in the total and junior world records in the clean and jerk and the total, it was unbelievably intense. Perepetchenov took 205 in a bid to move from bronze to silver, but dipped and didn't drive on the jerk. Filimonov took 205 for the gold and an Olympic record in the total, but the weight blew him out at the bottom, so he had to settle for silver.

And just in case there hadn't been enough excitement yet, Kim Kwang Hoon (Korea) called for a huge 210 kg in an effort to get the bronze (and the Olympic record in the clean and jerk). On his second attempt, he got dumped by the weight, but on his third attempt, he cleaned it, drove it to arms' length and appeared to have the lift, only to lose it behind. What a class!