Lignano Sabbiadoro, Italy - Survival was half the battle in the 94-kg class at the European Weightlifting Championships, and doing more than just getting by, Szymon Kolecki (Poland) won all three gold medals, posting a very respectable total in the process. 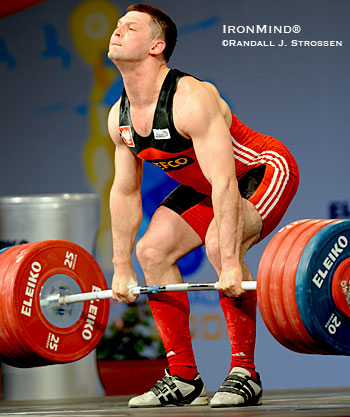 Szymon Kolecki scared the daylights out of a lot of people when he missed the jerk on this 220-kg opener. Szymon later told IronMind® that he felt the bar got out of position in the early stages of the clean, which made the rest of the lift very difficult. IronMind® | Randall J. Strossen photo.

They fell like flies in the snatch, as only eight out of the twenty-seven attempts were successful and three of the nine lifters bombed out in the snatch. One guy who did not need first aid, though, was Szymon Kolecki, who made 173 kg on his first attempt, missed 177 kg on his second attempt, and then came back to make it on his third attempt, for his first gold medal of the night.

Kolecki ended up only making one clean and jerk - 220 kg on his second attempt - and his opener had some people scratching their heads since it seemed so much more aggressive than necessary. Later, Szymon Kolecki told IronMind® that he done 210 kg easily in the warm-up room, but when the bar got out of position on the clean on his first attempt, it made the whole lift hard, and then when he had to follow himself, that also made 220 kg seem heavier than it should have.