It's very simple: When Gary Taylor tells you someone is strong, he is, and that's exactly what he told yours truly about Svend Karlsen at Marcel Mostert's 1997 European Strongman Classic contest in Hardenburg, Holland. 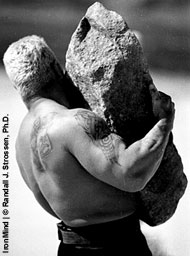 From what he'd heard, Taylor told IronMind®'s Strossen, "This guy is very strong," pointing to Svend Karlsen. A few years later, Karlsen won the World's Strongest Man contest, and along the way he created a worldwide base of fans and friends alike.

Because of his size and strength, it might easy to mischaracterize Svend Karlsen, because he's not going to conform to a narrow stereotype of what you might think he is. OK, there's the obvious muscle mass, strength and plentiful tattoos, but this is also the guy who at one of Ilkka Kinnunen's contests was handed the microphone and did an Elvis impersonation. "Never let me get a microphone," Svend later said.

And showing up in St. Louis shortly after the 2001 terrorist attacks on the US, Svend showed another side of his personality - undaunted about getting on a plane to make the contest, Svend was quick to denounce the would-be intimidators.

And then, fast forward to the recent WSMSS Mohegan Sun Grand Prix, where Hugo Girard ripped his patella tendon. Guess who went to the hospital with Hugo, was there until late in the night, and then early the next morning, was back at Hugo's room, making sure that the best possible arrangements were being made to get Hugo safely back home, and, yes, he was also the guy who got Hugo's bags packed.

A couple of days later, Svend Karlsen - along with his wife Lene, and fellow Viking Odd Haugen - came to the AOBS dinner, where he was a huge hit, but listening to Svend talk about it, he was wowed by such AOBS cornerstones as Mighty Joe Rollino and Slim "The Hammerman" Farman.

The next chapter of Svend's life is already filling up with plans for a clothing line, a food supplement, organizing an international strongman competition in Norway, and launching a series of fitness centers.

The Viking's knowledge and stage presence are going to be put to good use immediately by the World's Strongest Man Super Series, where he will be working with Colin Bryce, who told IronMind®, "The retired Svend is now joining me presenting. So he is swapping spit and sawdust for smart suits and silky shirts!!"

Putting Svend's new role in perspective, World's Strongest Man Super Series Tour Director Jesper Albansson said, "We all think it is important that these multi-talented athletes find new opportunities to contribute to the sport and also get new challenges in their working life! World Class Events is truly honored and happy about the fact that Svend will be working with us!"

Saying that it feels good to no longer bear the pressure of having to constantly be in shape, the 2006 Norway's Strongest Man winner said he and his wife, Lene, were ready to have a four-pound lobster for supper tonight - a fitting celebration since on top of everything else, the first airing of this contest was on Norwegian TV last night and it drew a huge audience; plus, it is expected to do the same when it airs again tomorrow.