"I can guarantee a new winner this year," Svend Karlsen told IronMind®, adding, "Mariusz won't be here this year." 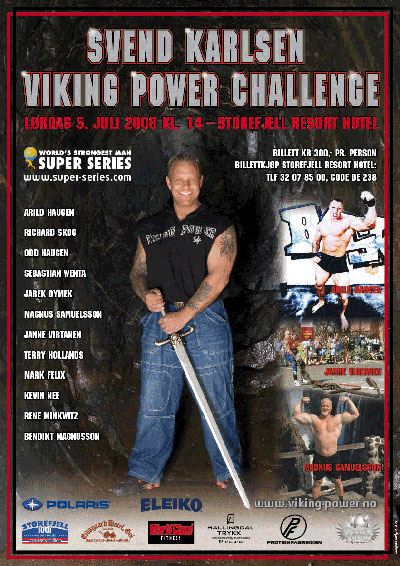 "This is the battle of the summer," Svend Karlsen told IronMind®.

"Arild Haugen challenges the whole field to lift all the stones," said Lene Alexandra Karlsen. "He is the only person to lift all five in this stone set. Last year they all tried: Mariusz, Magnus, Terry . . . you name it. They all failed. Arild did all five very easily in Norway's Strongest Man (NSM). He's in really good shape now - and by winning NSM, he got a spot in World's Strongest Man later this year."

"We also look very much forward to seeing some of the best deadlifters in the world in the regular deadlift as the second event. And with Mariusz and Hugo out, Kevin Nee and Mark Felix are in now."

Talking events, Svend told IronMind®, "We're doing some things a little differently this year. The Axle will be for maximum weight - last man standing - and it should come down to Arild Haugen and Sebastian Wenta, I guess, and I am looking for a new world record. I am also looking for huge numbers in the deadlift.

Asked why he is running the deadlift with a regular bar and standard plates, Svend said, "Because I have a personal interest in seeing what Benedikt Magnusson and Mark Felix can do when they really push themselves. Everybody talks about doing 400-kg deadlifts . . . now we will see. It's easy for me to be brave now," Svend said. "The Viking is hiding behind a microphone!"

"The Super Series organization is happy to come back to lovely Norway and the Viking Power Challenge, where yet another great line-up of athletes will compete for the Grand Prix victory," said Super Series Managing Director Jesper Albansson. Make plans to be there if you can.