Colin Bryce, a man of many talents in strongman, told IronMind® today that strongman.tv will be filming the Gaspari Nutrition All-American Strongman Challenge at this weekend's FitExpo in Los Angeles. 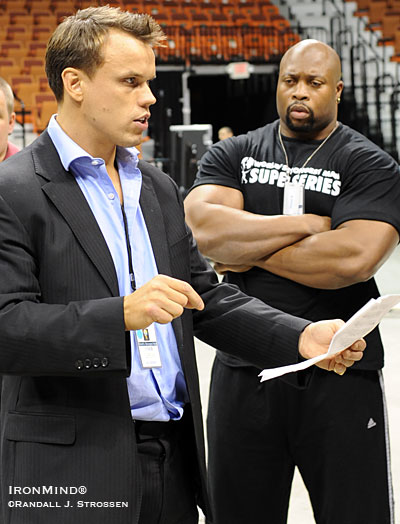 Colin Bryce preps the troops before the start of this year's WSMSS Mohegan Sun Grand Prix. Incidentally, take a look at Mark Felix's forearms: the night before, Mark had hauled up 301 pounds to win the 2008 IronMind® Rolling Thunder® World Championships, a lift that obliterated the previous world record. IronMind® | Randall J. Strossen photo.


Although this program will not be available live, Bryce explained, the film will be FedExed to London, where, "It will be flipped in two or three days," making it available to strongman.tv subscribers shortly after the contest itself.

In addition to presenting contest coverage of the Gaspari Nutrition All-American Strongman Challenge, this marks the beginning of strongman.tv's evolution toward covering more than just the very top echelon in the sport, as strongman.tv is intent on gaining added exposure for second- and third-tier strongman contests as well, Bryce explained. This expansion of program content would potentially provide all contest promoters an online environment for broadcasting footage from their events, Bryce said, and it is conceivable that content could include regional or local contests, as well as second-tier national competitions.

And lest you think this is merely a vanity option for everyone who would like to share his first, or maybe his greatest, strongman performance with family and friends, consider the career development opportunities as well, as Bryce told IronMind® that coverage on strongman.tv could be a way for prospective strongmen to display their talent, with the idea that it might lead to contest invitations.

"This creates a way for strongman competitors to document their performances before the strongman world," Bryce said, "and get themselves moving up the strongman ladder."

The Gaspari Nutrition All-American Strongman Challenge is at this weekend's FitExpo, and please check strongman.tv for subscription and program details.