Odd Haugen likes strength and next weekend he’s bringing strongman, grip and what he calls strongman combat to the 2013 Los Angeles Fit Expo—the field is big and to compete there, Haugen said, “You can’t be a chickenxxxx.” 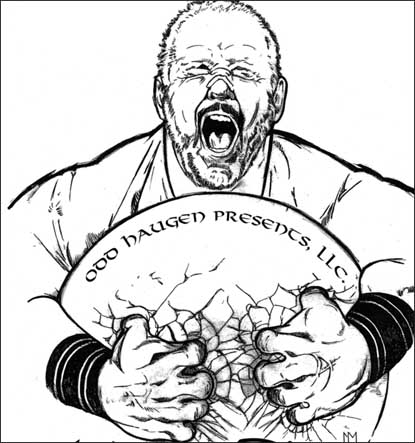 
He’s been lifting weights for almost half a century and his Rolling Thunder World Championships and Beauty & the Beast strongman contests from a decade ago in Hawaii are still talked about.

When Odd Haugen moved back to California, he brought his passion for strength and penchant for promotion with him: over the last several years, he has built his contests at the LA FitExpo into what is considered to be the world’s top grip strength competition, along with a leading strongman contest; and this year marks the beginning of something new as Haugen combines his zest for strength with his love of fighting, resulting in a hybrid he dubbed strongman combat.

Sounding a bit like Douglas Edmunds, Haugen said, “I like man-on-man competition,” and he expects to integrate events of this type into his strongman contests beginning next year.

As the IronMind News goes to press, Haugen has 14 athletes signed up for the grip contest, 11 for the strongman and up to 8 for the strongman combat division, and last night he told IronMind that he’s created a special trophy for the man with the best overall performance: “This will be a truly strong and tough guy,” Haugen said, and the trophy will be just as unique—a stone with the image of Odd Haugen crushing an Atlas Stone on it.

Along with these events, the IronMind Crushed-To-Dust! Challenge will be held in between events, so here’s your chance to show that you, too, have hands to be reckoned with.