The Strongman Champions League (SCL) opened its 2009 season in Subotica, Serbia yesterday and after a hard-fought battle with some of the world's top strongman competitors, Misha Koklyaev won top honors. 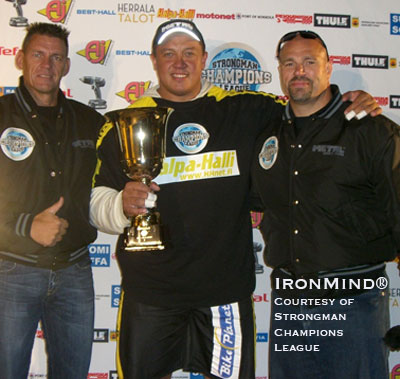 Misha Koklyaev (center) won the Strongman Champions League 2009 season opener in Serbia. SCL cofounders Marcel Mostert (left) and Ilkka Kinnunen (right) flank the man who many see as a favorite to break the world record in the Apollon's Axle™ at the Giants Live Mohegan Sun contest next weekend and possibly go on to become the first Russian to win the World's Strongest Man contest later this year. IronMind® | Photo courtesy of Strongman Champions League.

The season's first Strongman Champions League contest took place on Saturday (May 5) in the Serbian city of Subotica. The competition was held in one day and there were a total of 6 events.

The competition started at 3 p.m. when the sun burned over +30 degrees C [over 86 degrees F], so the hot weather made the competition for the athletes even harder, but this did not stop them from making some great performances in front of the crowd of 5,000 people.

The first event was the car pull arm-over-arm. The distance was 25 meters and the car weighed 8,000 kg. The fastest puller was Ervin Katona; second, Misha Koklyaev; third was Martin Wildaur, the 21-year-old kid from Austria in his second international strongman competition.

The third event was log lift for reps; the weight was 135 kg and athletes had a 60-second time limit. The top three were Ervin Katona, 9 reps, Andrus Murumets 8 reps, and Misha Koyklajev and Travis Ortmayer (tied) at 7 reps.

SCL wants to thank Ervin Katona, City of Subotica, all sponsors and athletes to make this competition happen and great SCL season opened.