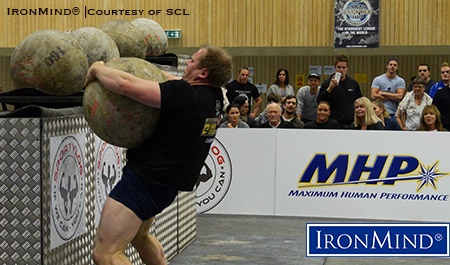 Zach McCarley and Ben Kelsey prevailed at SCL’s World’s Strongest Man under 90 kg/105 kg, respectively, and Kikki Berli has reported on the contest for IronMind.

At noon the next day 24 very excited men were gathered in Spydeberghallen. The TV crew was getting their cameras and mics ready, the competition crew was getting the arena ready and audience started to fill the tribunes. You could feel the testosterone in the air as the athletes were warming up backstage and the air was vibrating with excitement.   First event was Apollons Axle, last man standing. The start weight for the u90 kg class was 130 kg, and then the weight was increased by ten kg for each round. The current world record in the u90 kg class was 160, and Zach McCarley from USA was determined to set a new record during the comp. He did 165 kg easily, sat the axle down, bowed to the audience and decided to go for 180 kg. Zach did a very good try, but missed the lift by an inch (2.5 cm). The two Norwegians, Tim Enersen and Loyd Kaaland, both had a try on the 165 kg lift, but missed, and ended up on 155 kg.

For the u105 kg athletes the start weight was 140 kg, with 10 kg increases here as well. The current world record in this class was 173 kg, and several of the athletes were eager to set a new record. Vladimir Reksha from Ukraine did the first record attempt. He did the 175 kg clean and press very elegantly, followed by Joergen Aukland from Norway, Antanas Ziurauskas from Lituania, Ben Kelsey from the UK and Marcin Sendwicki from Poland. The next attempt was 180 kg, a lift that Reksha, Kelsey and Sendwicki did. Both Sendwicki and Reksha had a try on 185 kg, but didn’t get a good lift. The world record is Reksha’s.

The second event was a medley, consisting of duckwalk (170 kg, 10 m), suitcase loading (100 kg, 7 meter run, loading on to table 115 cm height) and farmer’s walk (2x120 kg, 10 m) Both classes had the same weights in this event. All athletes completed this medley, with Reksha was the fastest in both classes with his 16.69 seconds. After this event Paavo Paaso from Finland pulled out of the competition because of an injury in his shoulder.

Fourth event was supposed to be Atlas stones, but because of the tacky it was decided to switch the fourth and fifth event, so car deadlift came fourth. The weight in hand for the u90 kg athletes was 280 kg, and for the u105 it was 310 kg. For the lightest class the weight was set too high, and only 6 of 12 athletes got counting results. Tim Enersen won the event with 3 reps, while Reymond Rabben from Norway was fighting his single rep up extremely slowly.
In the u105 class Ben Kelsey and Marcin Sedwicki were by far the strongest deadlifters. Ben ended up with 11 reps, while Marcin had 10.   Maybe it was the front hold in the car deadlift that made this event so difficult for so many of the athletes? I don’t know … I just know it was surprisingly few reps to be counted.

Last event was the signature event of this wonderful sport: the atlas stone series. The stones were to be lifted on to platforms of different heights, with the highest platform being 170 cm. When you know that most of the athletes weren’t very tall, you can imagine the struggles the guys had to go through to get through this event.

For the u90 the stones were 100-120-130-140-160 kg, where the lightest stone should be loaded to the highest platform. Reymond, who just a week earlier had loaded a heavier stone onto a 170 cm high platform, didn’t managed any of the stones, and was left with no reps. Zach won the event with all five stones in an amazing 27.31 seconds.   For the heavier guys the series was 120-130-140-160-190 kg, loaded onto the same platform as the lighter guys. All the athletes managed at least three stones, and the winner of the event was Jiri Gronman from Finland.

On behalf of SCL and the crew working during this weekend, I would like to thank both athletes and audience for an awesome weekend.